August 18, 2014
Not viewing the photos or ask much about the place, we brought Amber to Sun Ray Cafe, we wanted to be surprised instead. Located at Brighton Crescent (Serangoon), Sun Ray Cafe is the closest dog cafe to our place since Doggiestyle Cafe had moved to east coast road (previously located at NEX mall).

Transport
We called a cab, in which the driver turned on the meter and started flipping his directory book, after 5 minutes he still couldn't find his directions so we called another cab, same thing happened and we had no choice but to find the way for him. Not sure what is it with cabs nowadays, in the past there were no GPS but every cab driver knew exactly which way to go, some would even offer to refund us if they made mistakes (though we didn't take the offer), they were also much more friendlier, down to earth and polite, nowadays we just meet rude drivers who simply command us to direct them, some even talk loudly on phone inside their cars.


Views of the cafe~


First impression
Well anyway, we finally reached Sun Ray Cafe, on first impression the place looked nothing like other dog cafes that we had visited in the past, it looked like a restaurant instead, and a cosy one! There were 2 dining areas and we are not sure how they work, probably one allow dogs and the other one doesn't, we were then lead by a staff to the bigger area where there were dogs roaming around. The place looked clean and were beautifully decorated, upon checking out the menu we noticed that all of the food and drinks are labeled nicely with detailed descriptions, there were also quite a number of choices for food and drinks which is a good thing. In the end we ordered fish & chips, prawn aglio olio and ice matcha drink. 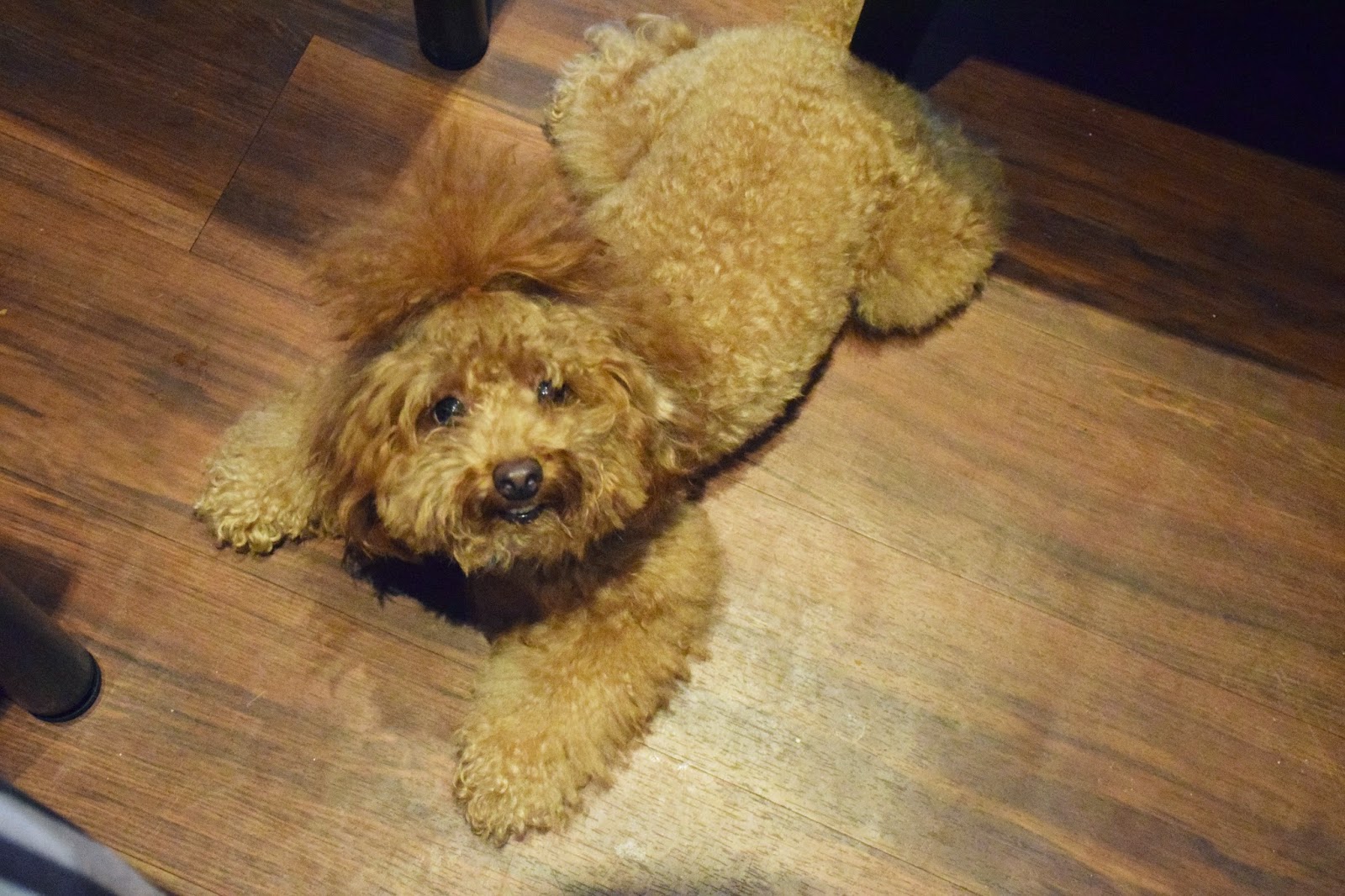 Safety for dogs
Upon waiting, we took the chance to look around the place as well as introduce Amber to the cafe, there were a couple of unstable dogs but luckily most of them were placed on chairs, except for one which came to our table barking at Amber, Amber seemed immune to it though. We noticed that the cafe had a lot of corners and pillars whereby it's hard for us to monitor Amber without following her physically, to add on the warm lightings made the place dark and hard to spot her. There were a couple of large dogs and they all behaved rather well, the naughty ones were the smaller ones, we considered ourselves rather lucky to be here at the right time, if there were any aggressive dogs we wouldn't feel safe to actually put Amber down considering the area concept. 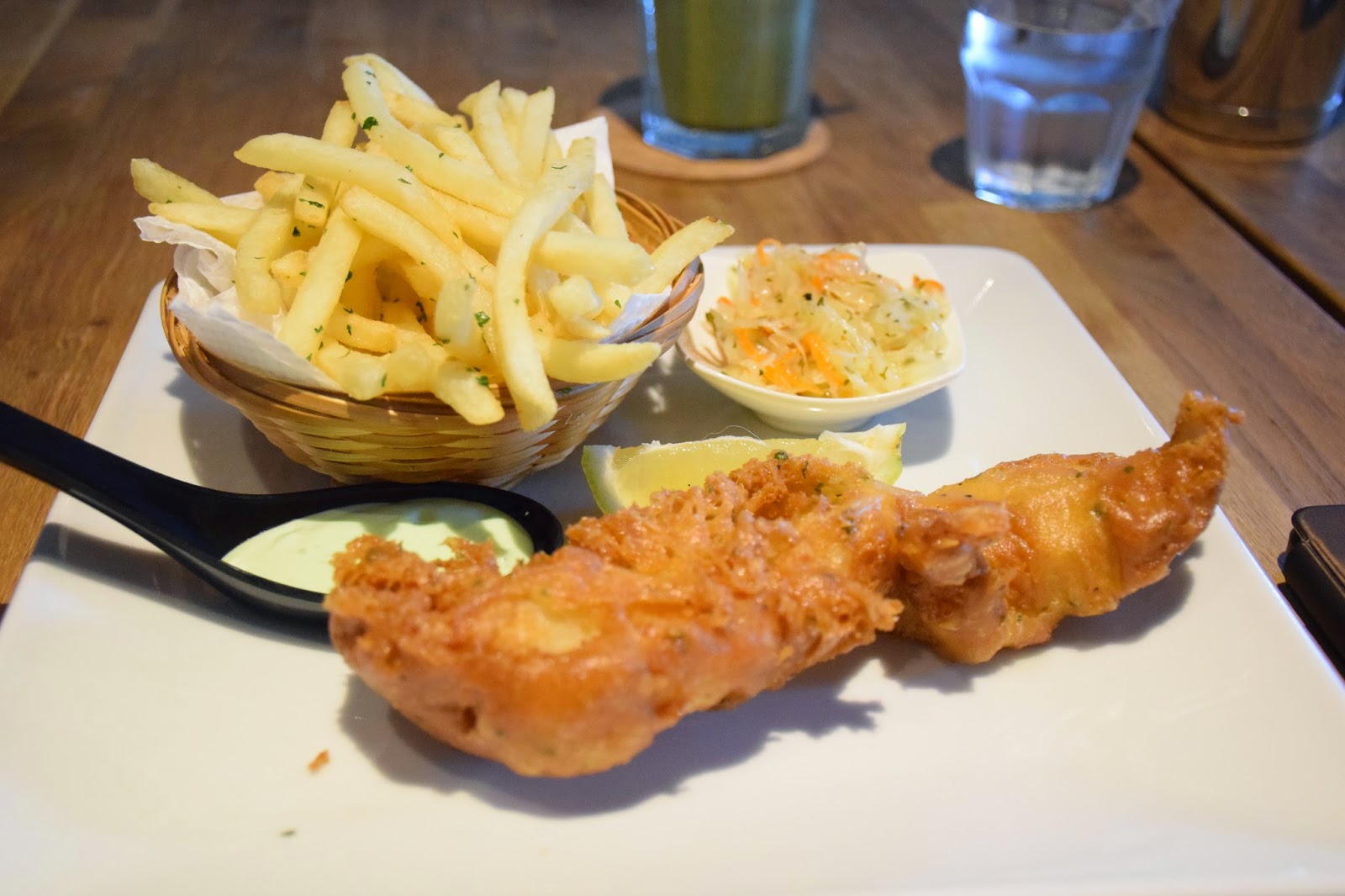 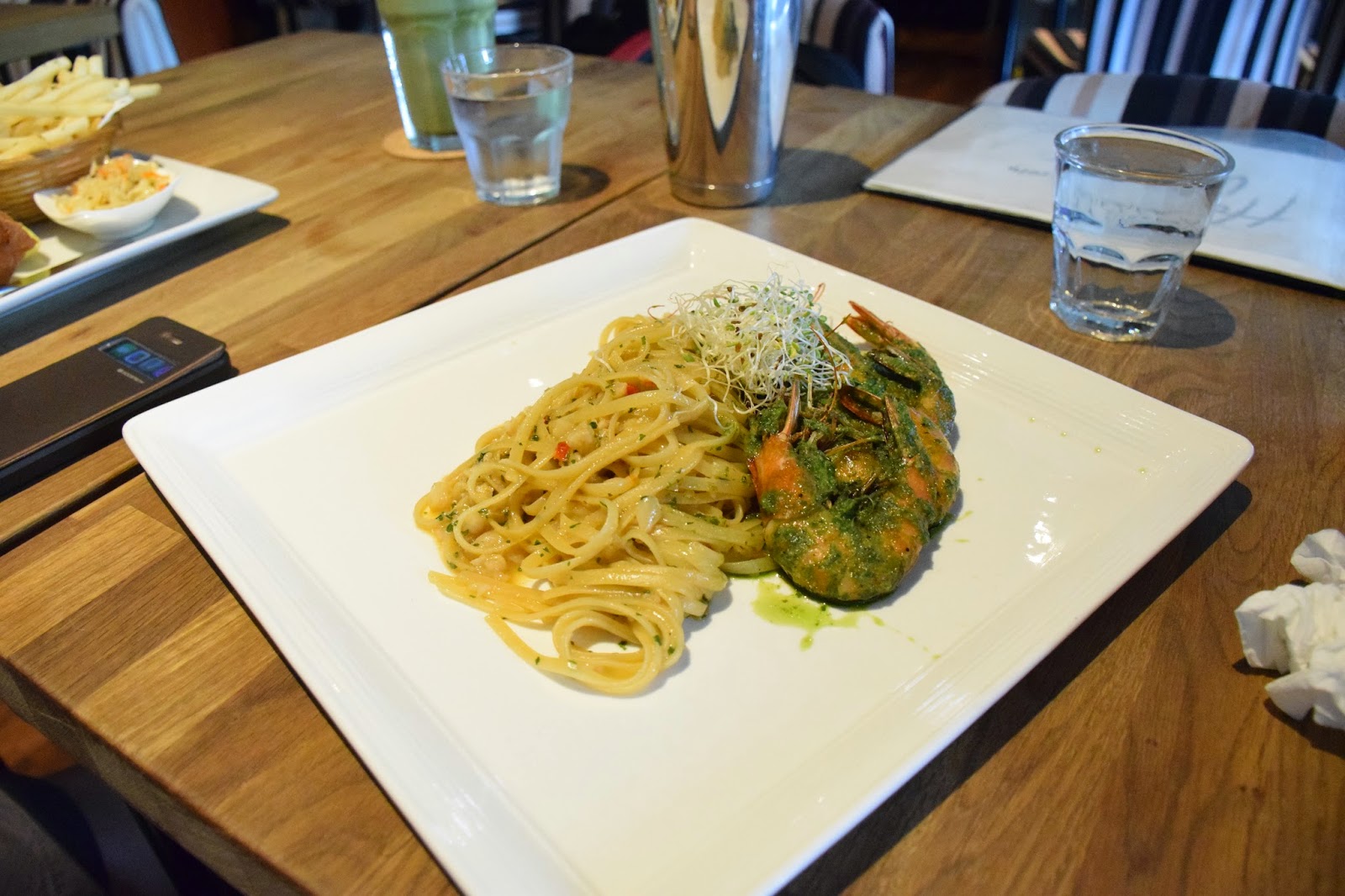 Food
Our food arrived in about 10 minutes, it was pretty fast. The fish & chips was served with truffle fries which was a plus, though the fries was a little bit too soggy, probably they didn't dry the oil enough, fish however tasted great and we had no complains. Prawn aglio olio was beautifully presented with herbs, it was surprising to see that the prawns wasn't de-shelled though, which can be a hassle if we had to use our hands while attending to Amber, nevertheless the taste was great! The matcha drink was a disappointment, tasted like drinking milk instead of the tea, there was simply too much milk in ratio to the tea. 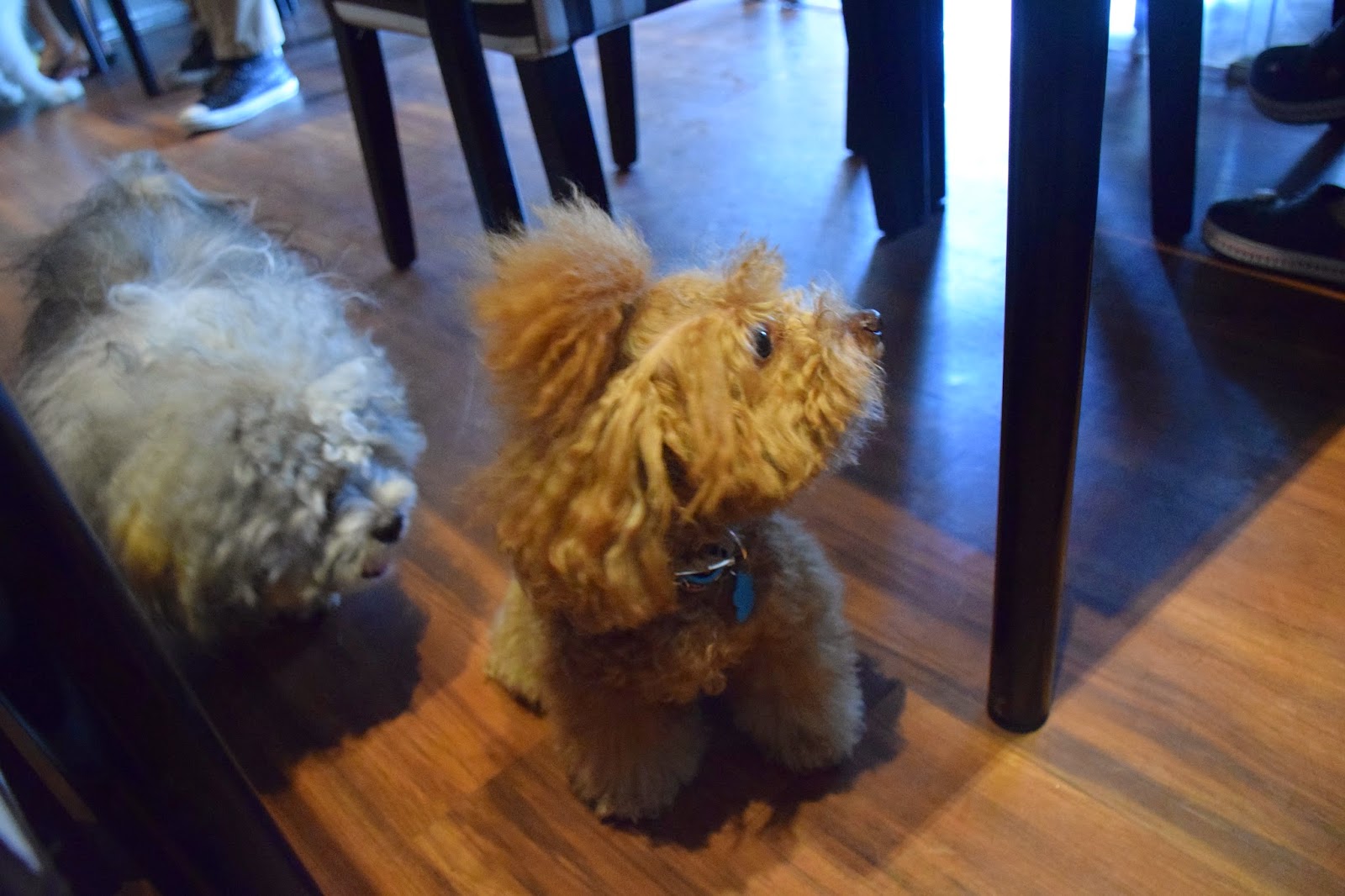 Amber checking out the place


Amber's experience
Amber did enjoyed herself and she behaved really well for a start, many people started to interact with her and she loved it, only thing was that we saw one of the tables feeding food to the dogs and we weren't sure if it was human food or dog food, had to recall Amber whenever she runs there. After awhile we brought Amber outside the cafe for some pictures, she really enjoyed her day! 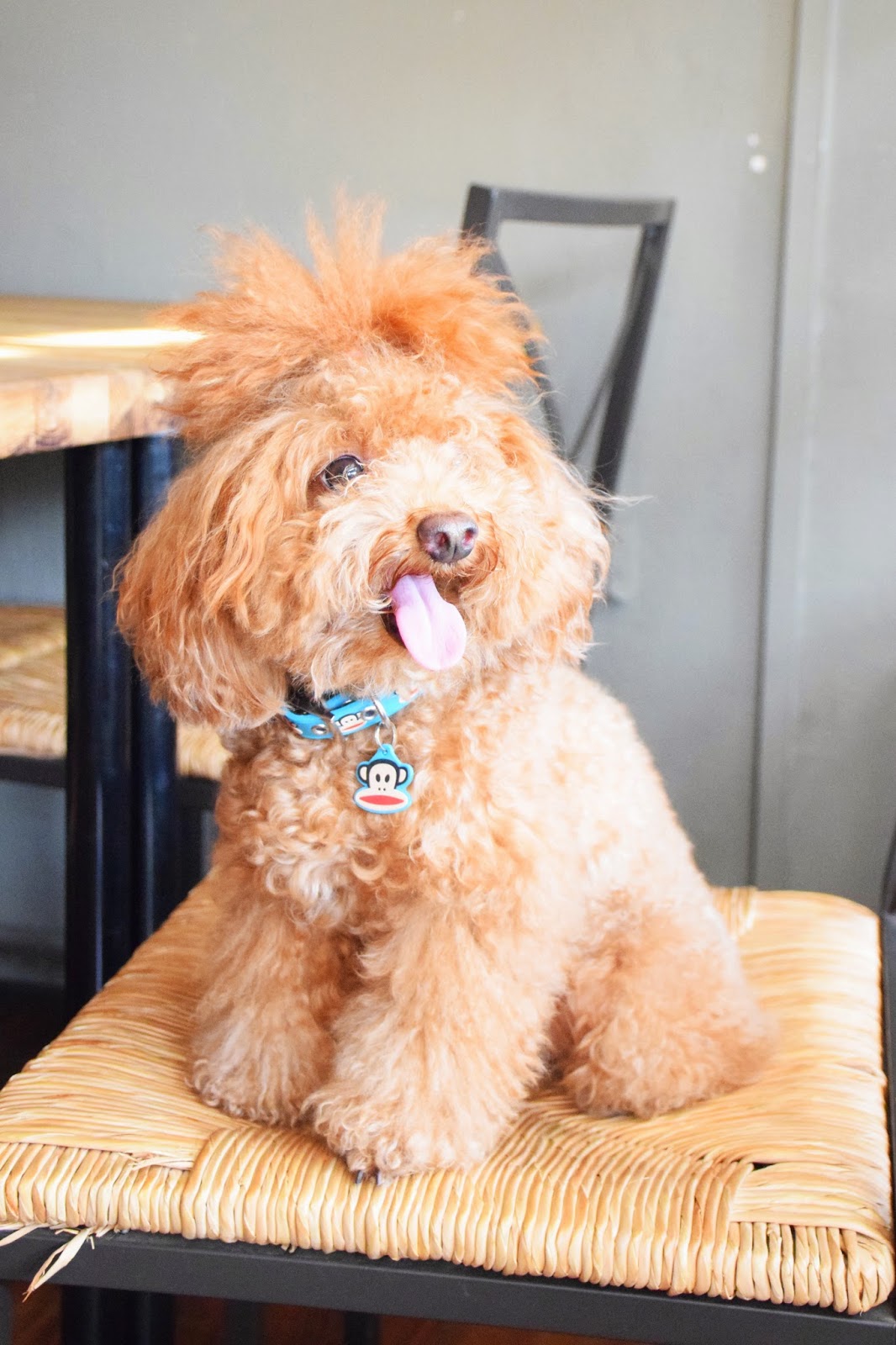 Overall, Sun Ray Cafe is a really good place for people to enjoy their food, their recipes are well thought and unique. Dog wise it is not as safe as most opened concept dog cafes but still manageable if we follow our dog closely, it's no surprise that there were a couple of dog accidents happening at this place and we believe is due to the concept. The cafe is designed very nicely with the warm atmosphere, we will definitely return in future! 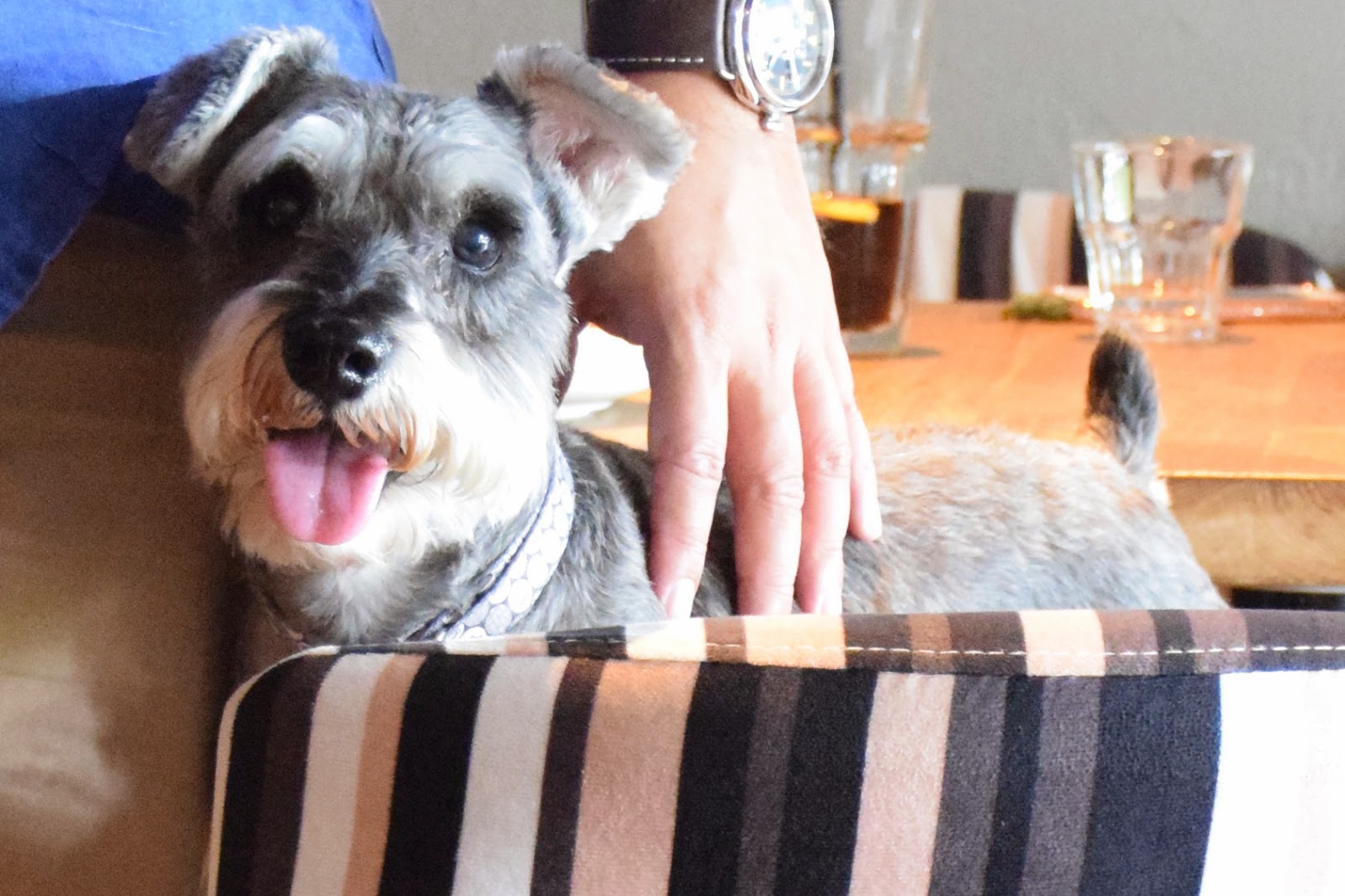