Dog eating and our views 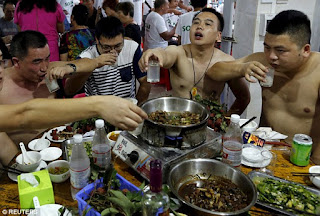 As you might have read in the news or from our page, Yu Lin dog festival is over and thousands of dogs have been killed just for the festival itself, this had been going on since 1990s but dog eating habits have been present in China since ancient times.

Now I have seen some remarks, especially those coming from vegans, saying that people who are voicing out about the festival is selfish, reason is quite interesting, these people stressed that humans kill animals like chickens, cows, pig and lamb to eat and yet complain just because dogs are also killed for food in China. In this post we are going to share about our personal views on this matter and why we still won't support people eating dogs especially in China.

Note that we are viewing this issue in a neutral way, everything is based on personal views and not meant for scientific purposes.


There are no systems to maintain the quantity unlike farms
For food that humans consume regularly, there are usually farms to maintain enough so that they will not risk extinction, if there happens to be such case activists will voice out for consumers to stop risking their extinction, systems includes most meats and vegetables. Dogs are not so overpopulated that they need to be killed for food, this is unlike some 3rd world countries where people kill pests for food, to serve both purpose of reducing the amount of pests and also filling up the stomach of the starving people, rats are one example.

These dogs are a mixture of strays and pets
We do not mean that stray dogs are okay to be killed, but if someone needs to steal another person's dog, it obviously means that there isn't enough of them in the wild. A lot of these dogs are found with collar and this means that they were someone's pet before being taken away, now this is very disturbing, I am very sure that the owners  who put their dogs on collar have a reason for doing that, and eating is not one of them. If a wild chicken is killed for food compared to a pet chicken, the motive becomes completely different, a pet is an animal that had been part of a person's family for a period of time, even in the past, humans do have animals that are kept solely for pets and those that can be used for food. Doing this is just plain murder and kidnapping.


Hygiene
These butchers do not practice any hygiene nor make sure that the dogs are free of any diseases before selling them, a useless law to make sure the dogs are free of diseases will not be taken seriously, especially not from greedy people who do not mind killing them for the sake of a trend. This risks people getting sick and spreading diseases to one another, rabies are one of them, most if not all of these dogs are also drugged before being kidnapped. 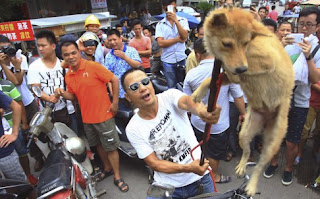 Torturing is a norm
Before they are killed, these dogs are actually tortured and left off to die, in China they believe that beating and smashing the body will make the meat more tender and tasty, this is always done while the dogs are alive, probably because it saves time (injured dogs will die off by themselves in pain). Those people also believe that eating dog meats can help ward off spirits, not forgetting to "cool down" body during hot weather and enhance male sexual organ, which are all bullshit. Being humans that need food to survive, we learn not to torture our prey before eating but these people are moving backwards instead. 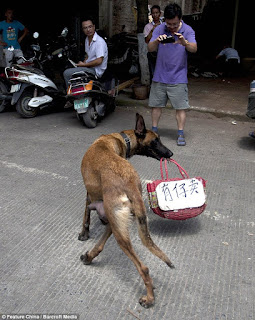 
Dogs are sometimes mocked before being killed
Look at the picture above where a mother dog is carrying a sign "selling puppies" with her head and tail down, signaling that she is very afraid and uncomfortable with the situation. Who would ever thought of doing such cruel acts, they are already going to be tortured and still being forced to help sell their children off to death? There is another video where dog lovers go to these markets to purchase live dogs so that they could save them, but being taken advantage of as sellers start torturing dogs in front of these people, hinting dog lovers to purchase them so that they won't be tortured further.

Plants are also life - Learn to respect your prey
I do understand that chickens, cows, lambs and fish are living things, but this is life, we need both plants and meat to survive healthily, plants are also being killed just as much as animals, we take their seed, plant, water them to growth just to put them into our stomach. However, we learn with what science have discovered and try our best to eat without causing pain to our prey, and to the best of my knowledge, plant and animal farms regulated by the government are one of the best ways to produce food compared to hunting, this includes better hygiene, prevent risk of extinction, approval from citizens and to stop other unethical businesses from killing unnecessary animals.


Exotic meat do not taste better
I have tasted more variety than the average Singaporean, not for trend but to try understand what these people are thinking and feeling when they eat exotic meat, I can assure that from the neutral point of perspective, these meat does not taste any better than our regular food, more often than not they taste worst.

So if not for trend then why would people still do such things? Below are some of the popular reasons:

Trend
The number one reason that people do such things is because of trend, they see others doing something and they just wish to follow for the sake of the trend, and this is a very pointless reason to kill!

Different
Everyone wants to be different at some point of their lives, and eating something different may boost their confidence, at the expense of another unnecessary life.

False Religion
The real religion always teaches to forgive and not to take unnecessary lives, never once would they encourage to kill innocent animals for their own selfish reasons. Those that start these myths are actually the businesses who wish to create the false impression that buying such and such could help protect or make someone healthier.

Health
Many think that eating something exotic could make their body different, and this reason alone could get someone to pay hundreds and thousands of dollars to heal or boost up their body, which usually results in negative effects.


How can we help?
There are a couple of things we can do, donating, signing petition etc. However in my opinion the best way is always to have a neutral view in such matter, there is no need to fight on whether eating plant or animal is better, both are lives and we need to take lives to survive.

Educate your friends and family about this cruel act, let them understand that it isn't just a food chain logic, dogs are not a part of our diet and they do not need to be killed in such manner, risking the consumer's lives is also another important thing as these killers only care about money.