Dog dead after being sent for grooming 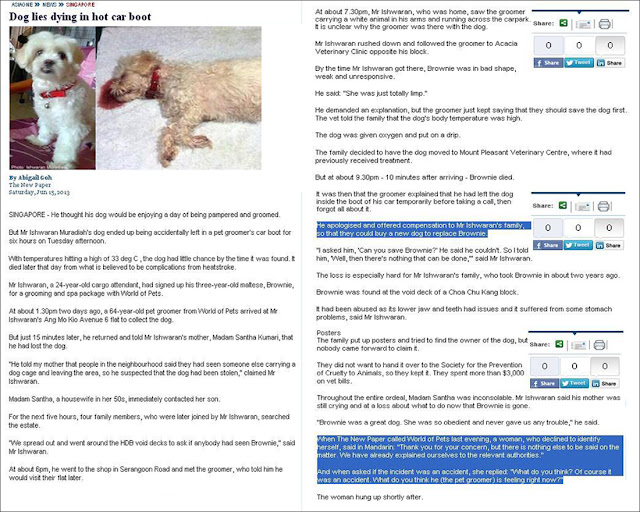 Sadly this happened in Singapore.
The Maltese - Brownie is dead after suffering for 6 hours in a car boot.
Shop name: World of pets (used to have a website but they took it down after this incident) 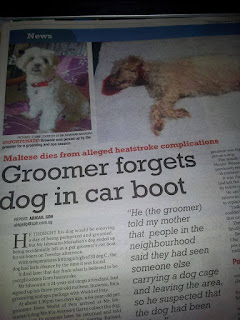 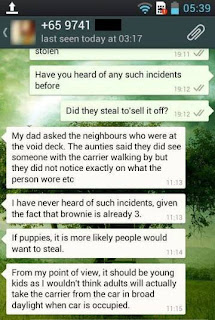 This is basically a pet groomer's carelessness led to a dog's death. What's more unforgiving is the many lies they have told instead of telling the truth of their carelessness. Why was the dog inside a car boot in the first place? The owner, who happened to be the pet groomer/deliveryman proclaimed that an "unconscious" mistake led to him putting a customer's dog into the boot of his BMW car.

Question: Why did he use a BMW car to use as a transportation for pets?

Most of the grooming salons in Singapore provides delivery services. They use Vans instead of normal cars so that it will be easier to put the pet carriers on board while this World of pets used a BMW luxury car to deliver pets to and fro?

Whatever the true motive is, our point to share this news is not only to tell people to be careful of groomers like this, but also to warn you that there are still many others out there that has no love for our pets, and they still choose to do business in this area simply because it is good money. Maybe they were once an animal lover, maybe they used to be dog show winners, whatever it is these people have since been shadowed by money and they will resort to abuse and lies if it can help them maintain or increase their reputation. We truly understand that nobody of the right mind would want to hurt or even kill a dog, but being irresponsible and lying is not the right way to go, it will only make things worst.

This is also part of the reason we still continue to update our blog with truthful reviews and feedbacks on pet shops and grooming salon even when we sometimes receive threats from people that do not want others to know about the truth.

We truly understand that there was nothing Brownie's owner could do to prevent this from happening although some people blamed the owner from not bringing their dog to the groomer personally. These people obvious do not understand the commitment of working adults, not everyone has the luxury to personally bring their dog down to the groomer every single time for 12-15 years. Rather it is the groomer's responsibility to take utmost care for other people's dog, we do not pay the transportation cost for nothing, we pay it for our dog's safety to reach your place and they are to return safely with no excuses. We can understand health issues that surfaced unexpectedly can be caused by the dog themselves, but things like bad handling and irresponsibility will not be tolerated.