August 11, 2012
We were searching online for the most suitable toy for Amber, it has to be durable and interesting for her as well as light and small enough for her to carry around. We looked around and found Nylabone toys, Nylabone alongside Kong are some of the most popular brands for dog toys. We thought for quite awhile and decided to get Nylabone Puppy Chew because of the design, this is a bone shaped toy that is twisted in the center as well as some ribbed texture on both ends of the bone to attract puppies to chew on it for longer period of time. Initially we wanted to get Nylabone fish but we ultimately chose puppy chew in the end.

We  chose the Blue puppy chew bone from doggyfriend but received the Orange bone at $14.85. The first thing when we received the toy was to wash it first, while washing I tried twisting the toy to test it's durability, dog toys are suppose to be made very durable and strong because dogs are vey rough when playing, they bite, paw and throw the toys hard, there is no point if it cannot sustain my slight twisting and pressing. There seemed to be no problem, I noticed even the coloring of the toy is good, it doesn't seem to be painted on, the whole material is colored before moulding instead, meaning if I break open the toy, it should also be orange.

We finally gave it to 3 months old Amber, she didn't touch it except licking at first, after a few hours when we left her alone she started to play with it, she tried to bite onto it but her mouth seemed too small for the puppy chew bone to fit onto her jaw, instead she just grind the sides of the bone as well as pawing it. The middle part of the bone was just nice for her to fit her mouth for carrying and throwing purpose, but it was too heavy for her size. She managed to fully utilize the toy at 4 months old, she would throw and wrestle the toy growling as if she is really a wrestler.

4 months later today, Nylabone puppy chew is still in mint condition, I even use it as a fetch toy and it is still intact without even a scratch. This is a very quality toy, Amber now has adult teeth and it is still durable enough for her. She still plays it a lot, I find that it greatly assist her in her puppy stage as puppy loves to chew, this would vent her chewing needs and make it easier for us to teach her not to bite. 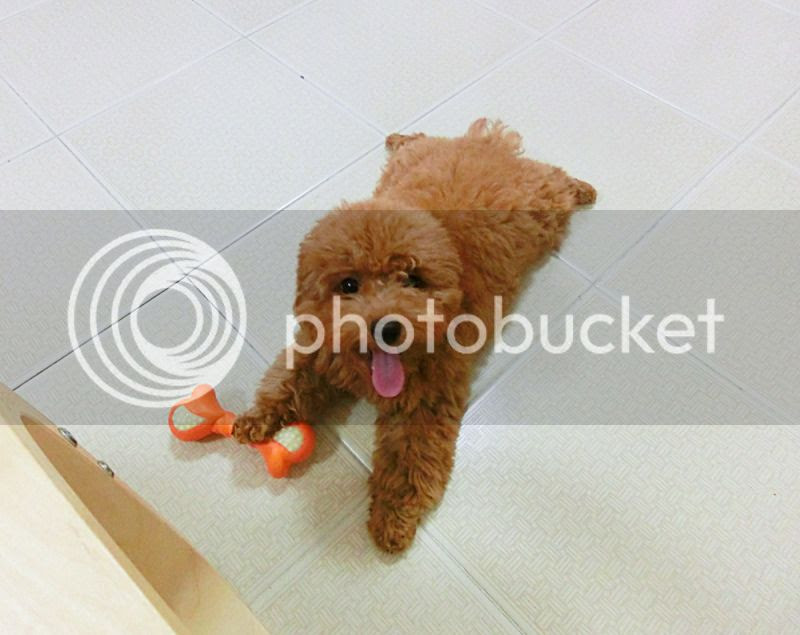