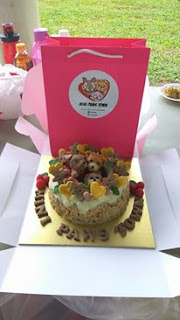 The event took place at Bishan park, we've only been to this park twice prior to this event, with the first time meeting baby Amber and her breeder. Bishan park is a very beautiful place, it is really huge and even has a dog park, saw a couple of children playgrounds too. The bad part of the park - huge but not categorized properly, very hard to locate specific parts of the place. We took a cab there and the driver placed us at the wrong spot! Nicole was unwell and we had to walk more than 1km to our destination, it was a torture.

Nevertheless we managed to reach the right destination in one piece. Luckily we were in time, I was actually invited to give a 30 minute talk on dog behavior and had selected 3 participants for the program, needed some time to talk to the participants and make sure their dog was misbehaving the way they were supposed to.


It was nice meeting a couple of dogs whom we've trained! Creamie seemed to be more willing to be handled by strangers and not snapping compared to the first time we met her. We also met Pocky and Weewee, it's been about a year since we last saw Weewee and it was nice to see that she isn't barking at other dogs anymore. Kuro's family traveled all the way to support our talk and we really appreciate it! Though the shelter was small, there was a little park with seats and also an area made up of sand, owners can have their dogs roam there if they are worried about ticks.

As this was the first time that I had to conduct behavioral reading session in front of huge crowd including humans and dogs, I couldn't predict how the selected dogs would behave, it could easily turn nasty due to too much tension from audiences, this is one of the reason why trainers don't usually correct behaviors in shows (apart from not wanting to share their secrets), unless you are talking about using pain as punishment of course. But since the motive of the talk was to educate owners on behavioral reading and demonstrating simple techniques (not resolving the problem on site), I went ahead and accepted the invitation.

Prior to the selection, we had a list of interested owners who wished to take part in the 10 minute private session (total 30 minute for 3 owners), through there the organizers would liaise with the owners to learn more about the problem. Because there were more entries than expected, I requested to have one more participant with barking issues to join in the session. When we gathered the participants and did a small introduction, I noticed one dog that wasn't misbehaving as told, it was tensed up and not moving instead of barking at strangers (this dog was also the extra entry we've selected), for this there was nothing to be done but I did not turn the person away, but instead have him join in with another dog (that can really bark non stop), hoping that he could learn a thing or two. Creamie and Chanel were the first to start off the show, I've heard about the two of them barking like crazy when they meet each other but this was the first time seeing it for myself. Yes the barking was really loud and sounded really bad, but it wasn't as bad as I expected, in a way they stopped after 2 minutes of correction. The next participant had a dog with rushing problem, a simple leash handling exercise solved 50% of the problem. The last dog had some reactive barking issues which was easily rectified with simple rewarding exercises. 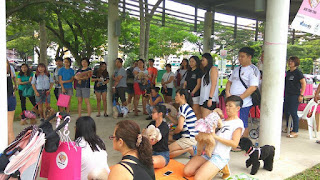 There was a dog that was recognized as one of the most problematic dog the organizers had encountered - an aggressive dog with no signal before attacking. I've seen videos of his aggressive behaviors and it does look abnormal - this dog was always facing walls/empty space while growling and would air snap randomly all around him. I decided to have him for one of the session, not to rectify the problem but to read his behavior and guide the owner on predicting bites, for dogs that are mentally unstable I would always advice owners to go for long term training to increase the chance of success.

The past dog events we've attend are sort of formal and official, in a way we don't see so many of the dogs being dressed up or kept in prams, and in those formal events most dogs we met with behavioral problems are more diverse - you can't foresee what kind of dogs you would be encountering. However for events like MPT, you have more dogs showing fear and demanding related behaviors(I am referring only to those with behavioral problems), I believe this is because there are much more owners here that over-pamper their furkids rather than abuse. This was a good experience as I get to see and learn about another side of dog owners circle, I also get to talk to and learn more about people that tend to pamper their furkids, no offense here as I like using my environment as a learning platform. Hope by sharing my honest view more owners will learn a thing or two with articles like this. I had quite a number of owners enquiring about their dog's behavior after the talk, two owners even feedback that this was the first time they had seen a trainer that was so willing to share tips on dog training without accepting a single cent, I felt really happy hearing that. 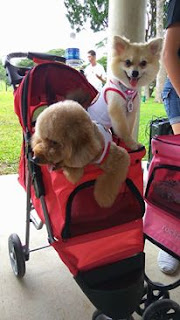 Overall the event was planned out really well for first time, it was short (3 hours event) and straight to the point, they even had dress up events and cake to keep owners entertained. The downside of the event would be the risk of having everyone drenched if it rains, the small shelter wouldn't be able to hold everyone and their dogs, luckily the sky was very clear on that day! I'll be frank to share the reason why we don't attend most dog events anymore, other than being busy with training, we find them too boring and repetitive every year. For example, Petexpo is one of the very first official event that we've participated, there are really a lot of programs and you will have to choose them carefully to avoid missing your favorite show, but problem lies with the fact that almost all them are repeated every single year. For first timer it can be entertaining (on our first participation we spent one whole day enjoying the event with Amber), but on the second visit, we started to feel that everything seems deja vu, the same German Sheperd pulling the same guy's arm, the same border collie doing the same tricks, even the same trainer just talking about the same topic that we've heard the year before, we left after merely 3 hours. In short, these huge events became predictable and boring after awhile.

In my opinion small events are actually much more entertaining because organizers wishes to attract more owners for the right reason - to keep humans and their dogs entertained for hours. Pets corner event is another one worth mentioning, the setting is very carnival like and there are even balloons for visitors. Its just too bad that the dog industry is all about money, small events find it hard survive for long because big businesses only wishes to sponsor in huge events, which is also why you are also seeing the same boring booths every year.

Nevertheless, Mini Paw Town's first event was a great success and we hope to see more in future.