May 26, 2016
Many professional trainers and rescuers continue to use abusive methods on their dogs, these people often refer to dog whisperer as an excuse for overpowering dogs unnecessarily.

As mentioned in our post here, "A number of owner who practices negative reinforcement have turned abusive, violence thoughts and anger management problems may start causing more unwanted behaviors than positive ones. Many professional trainers, as long as money and fame is involved have admitted causing abuse to animals due to their inability to control their mood and emotions."

People will always need to have someone to proof what they are doing behind closed doors before concluding that the methods are wrong and abusive, but have you wondered before they were exposed, how many other dogs were traumatized?

Are you really sure the dog whisperer show is really aimed to help dogs? Celebrities are always backed by legal teams and they are free to cut away any parts of videos that does not seem good for viewers, even though you may find some parts that are debatable, there will always be worst ones that are not shown behind the scenes. Celebrities are also trained and very familiar with handling unhappy viewers, using nice words as an excuse for their wrongdoings.

We truly hope that the guy involved in the video can be forgiven and given a chance to change, not by allowing to handle dogs in future, but by giving him a chance to live as a better human being. 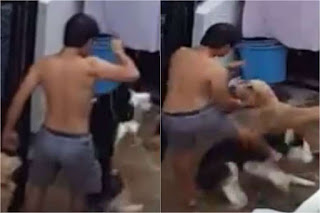