November 20, 2013
Amber is doing well as usual, learning new commands and tricks to impress children and her caretakers. Now she will be 2 years old this December, her character is more or less fixed and we want to share with you her strengths and weaknesses. This is not to compare, but to let people understand that all dogs no matter how well they look will still have their weaknesses, and that doesn't mean we should give up. 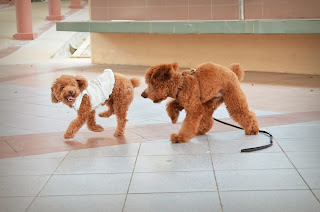 We expected Amber to be in the high energy category but she was way beyond our expectation, for her size and age this was the most hyper active dog we have ever seen. Even at almost 2 years of age, the excitement level did not reduce much, 1 hour walk is the minimum amount for Amber, even after returning from walks and bathing she will still run about in the house, asking for more exercises and play time.

Rarely did we get to see Amber being relaxed, even with proper training this was the best she could be, we can't imagine how bad it would've been if Amber was not properly brought up. Training Amber is comparable to training a medium energy large breed, she demands a lot of attention, care, exercises and training to be what she is today.

Easily excited/nervous
Because of her high energy, Amber gets excited and nervous very easily, she has very high metabolism rate and this was not an easy task for us, we have to constantly remind her to stay calm at all times. 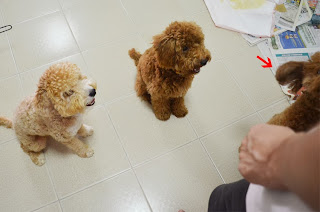 Amber gets jealous very easily when she sees us with other dogs. She would use soft whines and purposely nudge us when she sees us patting or playing with another dog, there was even once where she barked at us with another boarding dog when we ignored them both. Amber does not vent her jealousy on any dogs but she will portray certain unhappiness on us like pawing, whining, nudging and barking, the barks we are talking about is not those typical ones you see in guarding dogs, Amber would purposely soft bark together with other dogs to
trigger our anger.

These behavior were noticed at 1.5 years old, and is still going on even after correction, improvements are sometimes varied depending on what dog she meets. Even though we do set her as the leader between other dogs, she still can't get past this stage at this point of time. Amber probably needs a permanent buddy to get rid of the jealousy completely, we don't blame her but correction is still a must otherwise it will just get worst. 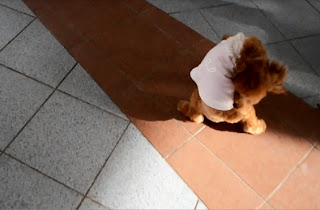 Amber's tail is always very sensitive, she hates being touched by the butt area and would turn back and fake bite, by using the command "No", she will stop but still feel very uncomfortable. She also dislike when the leash is too loose which sometimes brushes against her back area. The worst part of her tail sensitivity is that she can't tolerate wind, which affects her walk training, she freezes and would walk sideways when there is strong wind. Clothing are also a huge challenge for her, we finally decided to give her clothing only during events and would try to get those that won't fall on her tail.

This is the problem with some dogs when their tails are docked, Amber's case is still considered minor, we have seen dogs that has no confidence just because of their tail, some even bite and try to tear up their back area. It is very hard to find poodles with un-docked tail, even if there is it is usually those unethical breeders that don't dock their puppy's tail because they simply don't bother to, most dog show breeders would dock their poodle's tail for cosmetic purpose and there is nothing much we can do.


Is not greedy nor craves affection
Thought Amber do demand attention, she doesn't enjoy pats and hugs. Belly rubs and stroking is still alright but she will get irritated if given too frequently. She is also not into food and treats, she does crave and eat them but will not hesitate to ignore if she sees something interesting like strangers and other dogs. This is considered a form of weakness because dogs generally needs praises, affection and treats to be trained, if a dog doesn't appreciate any of them then training will be slowed down, some trainers would even switch to abusive training when this happens, meaning if the dog does something right, it will be as it is but if the dog does something wrong, it will be hurt.

However if we were to compare to the 3 forms of reward (praise, affection, treat), treats are by far the best reward for Amber, to improve this we have to constantly change the flavor and type of treats to make them more interesting for her.


Conclusion:
Amber is not the type of dog that dog trainers would use to boost their reputation, her disadvantages would cause potential customers to doubt because of her high energy challenging character. We chose Amber because she appealed to us in both looks and health, energy didn't matter to us, it is even better this way to show people that even high energy dogs can be trained as well. Next we will go on to Amber's strengths. 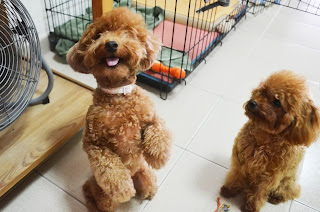 Poodles are very clever, but Amber is smarter than the average poodles. With this natural talent and our early training, Amber's learning ability is no joke, she could learn new commands and tricks within days. Other than fast learning ability, Amber can also read people within minutes and adapt to everyone's character really fast. However being clever can have its downside, Amber is constantly challenging us, she would test us at times and could even get out of certain unwanted situation without us finding out till hours later. 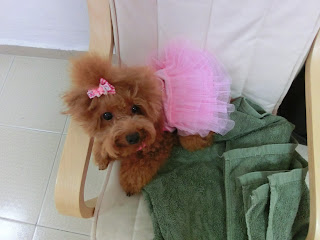 Amber is a toy poodle, but any smaller and she would've been considered a teacup, which falls in the unhealthy range. We knew Amber was small when we first saw her but we did not expect her to be this small at adult age, she is about 2.5kg currently in her adult size. Knowing that Amber is perfectly healthy, we are very happy with how she turned out in terms of look and size. Though her body is slightly longer in terms of proportion, Amber is the idea look and size for most households. 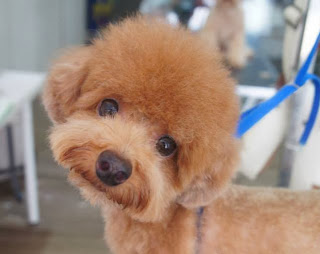 Amber is already healthy as a puppy, by giving her exercises and nutritional food she got to maintain her healthy body till today. She has some minor issues like allergies to chicken, minor hotspots and high metabolism rate, which causes her to be skinny even when she is eating well. Even so Amber is in the healthy weight range for her size and her skin problems can be eliminated easily as long as we feed her the right food and boost her immunity with exercises. 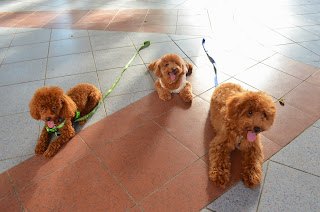 Amber is very friendly and would never bite unless her limit is up, aggression is usually very minor and it is just towards us during training. Even when aggressive dogs tries to own Amber, she would still choose the escape option as taught and we are very happy with it. Amber also learned to cheer dogs up, by sharing her toys and treats(occasionally), she really proved to a lot of people that all dogs are trainable. Other than dogs, Amber simply loves anyone she sees, she even tried to change the hearts of people that hated dogs in the past, and true enough she has succeeded towards everyone she had met.

In closing
Now more or less you understand Amber's strengths and weaknesses, did you expect her to have so much weaknesses in the first place even though she seemed fine in videos as well as in real life? Most people don't understand unless we explain to them in detail, they are always confused as to why we would push Amber to be better even though she looked fine as she is, people can't see the effort, they can only talk because talking is free, it is the work that counts.

Since you have learned more about Amber today, why not try figuring out the strengths and weaknesses of your dog? It helps by writing them down because this can become your personal checklist in the long run, every time you succeed in an area which you believe is your dog's weakness, check it and continue to improve other areas. Always remember, pushing a dog to improve and torturing a dog are 2 different things. Pushing is where you challenge your dog to improve using non harmful methods, dogs love challenges, if you don't teach them new things they will get bored of their daily lives, one day they might just turn anti social and stressed out. Abusing is when you hit your dog when it misbehaves, shouting at the top of your voice without valid reasons, getting lazy to walk and interact with your dog, these in our opinions are a form of abusive treatment.