July 04, 2015
We have been back from our trip for quite some time, this post was finished late as we we had difficulties finding time to write long articles.

Our trip to Gold Coast went smoothly with little hiccups, weather was really good, it was a little cooler considering the time of the year and we enjoyed the occasional cool breeze. Gold Coast is famous for having a lot of activities to do, for young people there are a number of theme parks, hiking and water activities, for those who prefer to relax there are many restaurants, awesome hotels and a nice beach to enjoy, their zoos are also very good for the whole family to visit. We will not be focusing on other areas except for those with animals, in total we visited 3 places that has animals - Sea World, Dreamworld and Australia Zoo, there weren't enough time for Currumbin Santuary so we skipped this time round. 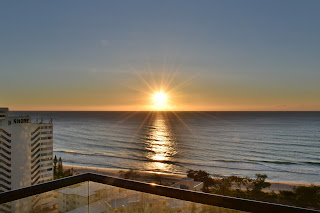 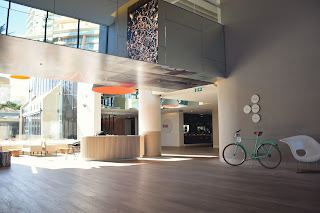 
We booked a shuttle bus that brought us to different theme parks at about $260 AUD for 2 person, which last 7 days, this package includes unlimited local bus rides, unlimited shuttle transfer to themeparks and back to hotel (at specific timing included on their schedule), and also transfer between airport and hotel in Gold Coast. It was really easy to find the shuttle counter in the airport when we landed, we simply showed our purchase documents and the staff exchanged them with a pass kept in transparent zip lock bag. We waited about 20 minutes for our bus to arrive, our first experience wasn't good, the driver rushed us as we carried the luggages up the bus, he did not offer to help us with them either. On the bus there was an area to store luggages, it was a bit hard as the gap was quite small compared to the size of our luggage, he drove off before we even finished. We could see that there weren't many passengers, only 3 and there wasn't any point rushing. Upon reaching our hotel, which was at QT Gold Coast, there were no staff present at the door, we simply found our way in and checked in at the reception. Hotel room was really awesome, we booked the room with sea view and emphasized many times that we prefer high floor and unblocked views, our request was fulfilled and this is now one of our favorite hotel around the world!

Well back to the parks.

Not to be mixed up with Seaworld, which is actually located in America, in Seaworld (America) they uses Orcas for shows, not sure if you have watched the documentary Blackfish where there are a lot of speculation about the animal treatment there, we have yet to visit Seaworld therefore we are unable to come up with an opinion. Sea World Gold Coast was voted the top tourist attraction in Australia and we were looking forward to our visit! 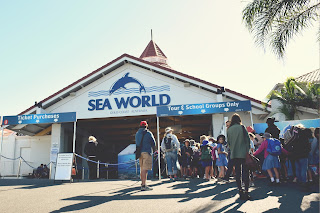 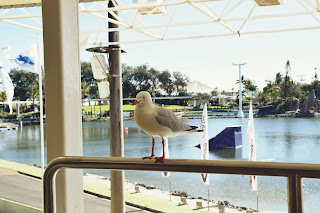 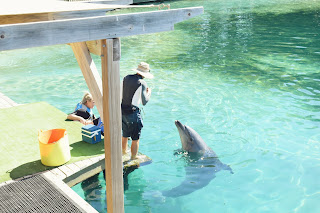 The trip to Sea World was pretty fast, about 30 minutes, upon reaching we could see a large entrance with the sign Sea World. During entry we saw some penguins and shark statues, the entrance set up was similar to our trip to Japan's Osaka Aquarium. Once we entered the park we were greeted with a magnificent stage where we thought was a platform for all the shows to be held, however after looking at the map we figured that dolphin and penguin shows were held at their respective areas, this big stage was only for shows on water sports. As we followed the schedule on the map provided, we rushed over to see the penguin show first, but was disappointed as the attraction was temporary closed, we then walked around for a bit before watching the next show, which was the dolphin attraction. On our way we saw some dolphins in their respective enclosure, which seems rather comfortable - open space and a big space to swim about, not sure if this is where they would staying at night though. We also saw a customer who signed up for the dolphin encounter, they were allowed to get into the water and contact directly with the dolphins, feeding and having them to do some tricks, it seemed fun and also costly. 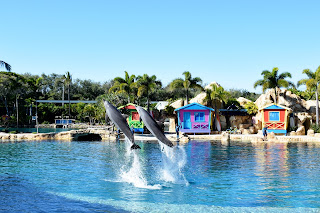 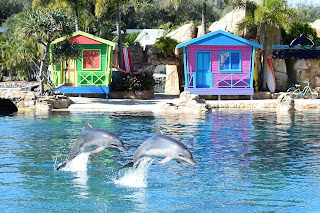 In our opinion the main attraction of the park would be the dolphin show, trainers would explain about the life of dolphins and start doing some crazy stunts with them, we could see that the trainers really enjoyed what they are doing, as for the dolphins there were no way for us to really know how they felt, we did see some of them with minor skin problems but the rest seemed okay. 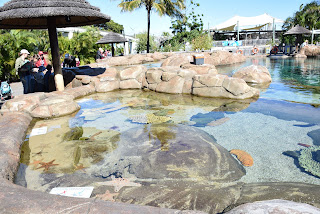 This is not exactly the ray section, but it's similar 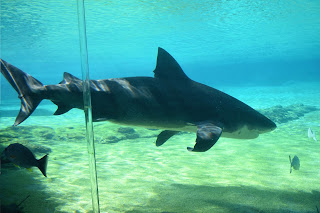 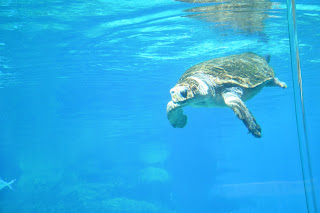 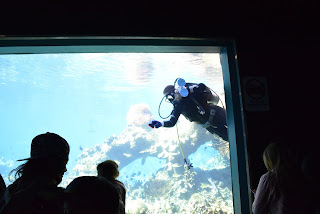 That, is not a marine animal 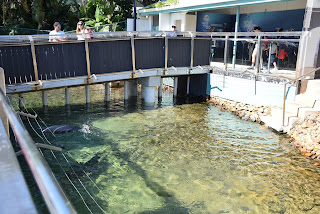 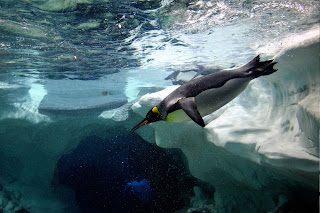 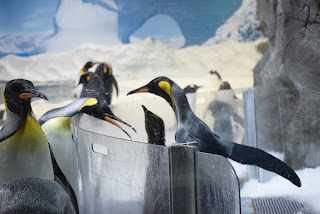 Fighting to protect it's child 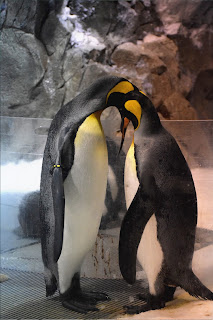 
After the show we went over to touch some rays, some were really big but all of them are gentle. Nearby was where the sharks lived, in a very huge tank with other fishes and even turtles around, not sure how they got along, we enjoyed looking at different marine animals in that tank, it was a cool experience when they swam close to the glasses. The sea lion attraction was not as good as we had expected, it was feeding time but the trainers were waiting for people to pay and feed the sea lions up close, the enclosure was also pretty small and smelly. Up next were the penguins area, they were located in an air conditioned space with some blue wall decorations, in our opinion it seemed too small and unnatural for the penguins to live in, the good experience was being able to see the emperor penguin guarding it's chick, many were exclaiming and wondering about this chick who looked like another species of penguin, not know that emperor penguins are supposed to look fluffy and brown when born. 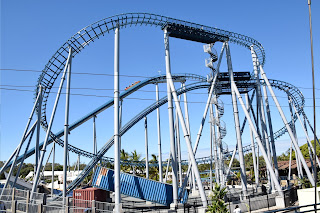 One of the few rides available 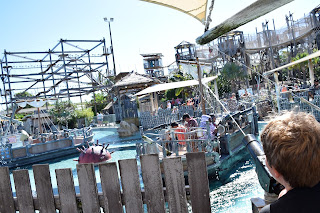 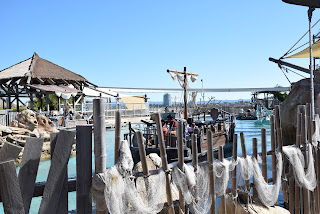 We then took the monorail and found out that we had finished most of the attractions, there were supposed to be a number of thrill rides but all of them were removed or under construction, it was a huge disappointment because the website did not update any of these information, it seemed like they just wanted to get more visitors without caring about what they felt. After buying some ice cream we decided to walk towards the kids area before leaving for the last show - water sport, the kids attraction seemed really fun, you have the ship with water guns loaded, and people watching can also spray water at the ship, it's like a mini contest to see who gets wet first! The other kids attraction was the tree playground, where they can climb ropes and tunnels. 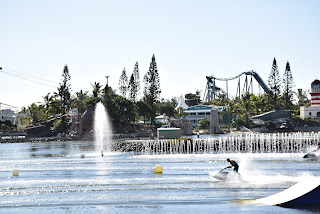 As the show was near, we went to find a seat, only to see lots of seagulls fighting for leftover food that wasn't cleared up properly, we noticed that rubbish were everywhere in Gold Coast. The show was about 2 water boat stuntmen "challenging" each other, it was pretty fun to watch but got a little repetitive after awhile. 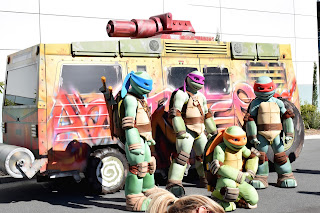 We finished the park in about 4 hours and were pretty disappointed with the experience, in the end we took a public bus back to the hotel as we couldn't afford to wait for our shuttle ride.